The first rock track I ever wrote... maybe rock is the wrong word for it but it was something very different than what I had been doing and it came about as the result of the most unexpected of journeys.

February 2004 to February 2005 is a period I often refer to as the worst year of my life. After struggling to get my life back on track following a visit to the "tired hospital" as they say in polite conversation I narrowly avoided being deleted from existence by a congenital heart defect that didn't have the decency to rear it's ugly head at a period in my life that would have been a bit more more convenient.

By the time I was finally able to get back to work at the soulless retailer that employed my sorry ass, I was starting each day feeling bitter and lost, choking on resentment and drowning in the depression and anxiety that dropped me in this hole in the first place.

Medication had made things worse for me and therapy had just never really helped. But that's me. I always have to take the road least traveled because of hazardous driving conditions, falling rocks, quicksand and monsters lurking around every corner waiting to slap the living shit out of especially when you most expect it.

And the bridge is out.

But I had found one thing that helped. My best friend had passed on some software to allow me to make music in the shadowy corners of my life if for some reason I ever felt the urge. Even though I had grown up in a family where music was basically the "family business" I had long since gone in an entirely different direction with my life.  Mostly anything but music.

At first I made music that was goofy and silly on purpose, something that my friend and I could laugh at together, just one more inside joke only the two of us would ever get. Before long I was working on music in every free moment I had. It started to leak into my brain and push aside the blackness. I would work on music in my brain for hours not realizing the anxiety and depression were being pushed aside. When shit got overwhelming I'd make music. I'd work it out there.

I finally had something.

Did it solve all my problems? Not even close. But it gave me the ability to function as a human, dad and husband without a bunch of side effects. It put me on a playing field where I could face my demons head on instead of starting each day with a surrender.

What the fuck does this have to do with this song?

Well, by the end of 2005 I was starting to sink again. I began to wonder if the worst year of my life was turning into an era and the grind was starting to get to me. Driving in to my graveyard shift at work every night I could feel the panic and despair taking over. It wasn't just me, one of my bosses was a legitimate piece of shit and even though all the things that were bad at work weren't necessarily his fault, the way he approached them with his underlings wasn't helping.

Also, a bunch of the bad shit was just plain his fault.

I can't tell you what it was that brought this track on other than I started working on it because I wanted something to listen to in the car as I drove to work. Something to calm the nerves and soothe the voices that would get louder and louder the closer I got to clocking in. My usual playlist wasn't helping so I took it on as I handled most adversity at the time. I didn't depart from my electronic sound for any conscious reason, it's just how the music sounded in my brain so that's what I had to do.

It did.  Enough, anyway.

So that's the story behind I Hate AJ. There's a story behind every piece of music written in the history of man and to be honest most of the stories behind my stuff are pretty damn dumb. This isn't the best track you'll ever hear, it probably won't change your life and it sure as hell can't be counted on to provide any answers.  It simply is.

But because of it, I am too.

for all those who have helped

I would like to again extend my sincere gratitude for everyone who has chipped in and purchased the song to raise money for my sister. She is currently doing very well and her spirits are higher than they've been in a long time. There are no words that I can manage that would even begin to express how much help and strength your support has given us.

Now that she is getting back on the right track I will no longer be selling the song after Friday (October 7) of this week. If you have purchased "Tuesday Q" and have not yet downloaded it to your device or computer and are no longer able to after Friday please contact me at remedialmtheory@gmail.com and I will get you your copy.

Thank you again for everything,
J 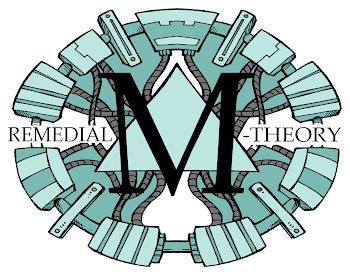